Inside My Body When I Run: Ep. 3 Skill, Speed, Performance

When it comes to running fast and performing when it matters, you not only have to understand HOW to move, but how to LEARN to move. This article will cover what it means to be a "Skillful Runner" and how you can train to increase performance while reducing the likelihood of injury. 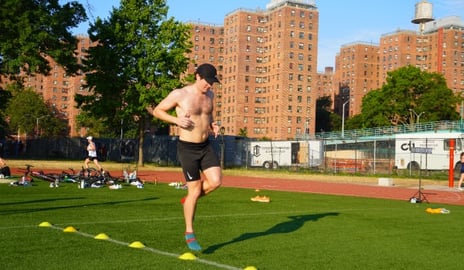 When you learn a sport, you're typically taught the "fundamentals" and given drills to improve sports-specific movements. You're also told that practice makes perfect and that if you train hard enough, you'll get closer to achieving the elusive "proper technique." You're expected to put the pieces together and execute the necessary movements to participate in said sport.

The issue with this traditional approach is that movements are taught in isolation and decontextualized from the performance environment. Sports-specific movements are broken down and reduced to the point that they start to look nothing like during competition. That's why it's not uncommon for athletes to perform great in practice but crumble under pressure. Running is no exception.

To be skillful is to be adaptable, and a skillful runner can maintain consistent output in the face of changes to their external environment and their internal body.

You can do all the running drills or run-specific exercises in the world, but if you don't take the time to learn what they are teaching you about what makes your movement system unique, you'll end up wasting precious resources building capacity without converting it into actual skill.

Why do we get injured when we play sports? Two commonly held beliefs are that injuries occur because athletes are not using the "correct" technique or because their training volume/intensity exceeds their capacity to recover. Either you're not doing it "right," or you're simply doing too much.

The issue with these two beliefs is that it assumes an "ideal" technique will reduce the likelihood of injuries and that training volume in itself causes injury. Here we'll break down these two assumptions and discuss ways to maximize your training to become a faster runner.

"YOU'RE NOT DOING IT RIGHT"

Training to improve your running technique is less about achieving some form of ideal but instead figuring out how to run in a way that best suits your body. As much as we admire movement quality from athletes such as Eliud Kipchoge, we can't all replicate his technique and assume that's the secret to his success.

This is a big issue among new runners because not everyone has a coach guiding them through the skill of running and learning how to handle the constantly changing stresses of high performance in different environments. They're left to fend for themselves, searching for "How to run faster" and applying every cue they come across on the internet until something sticks, without any idea of how they need to change their training over time.

Although running technique has significant implications on performance, don't force yourself into a box that's not meant for you. When it comes to running fast, Cadence and Foot Striking patterns are examples that relate to this point.

Cadence is the total number of running steps per minute, AKA "step rate," and can be assessed by counting the number of footfalls/strikes on one leg within a minute and multiplying it by 2. As you run faster, your cadence increases, which is why it's often used as a performance measure.

"Ideal" cadence in elite runners has been shown to be between 170-190 steps per minute.

A widely circulated myth is the "180 Rule", which maintains that 180 is the ideal cadence at which one should run. Why is this a myth? A running coach long ago observed elite runners at a race and found that not one ran at a cadence less than 180. Firstly, what the takeaway here should be is that a cadence OVER 180 is ideal, not exactly 180. Secondly, we know that running faster leads to higher cadences, and since we are not elite competitive racers, we should expect our cadence to be lower than the guys this coach was observing.

In regards to injury, increased cadence has been found to be helpful in navigating multiple injuries such as Achilles Tendinopathy or Patellofemoral Stress Syndrome. The difficulty with cadence is it can be difficult to accurately maintain consistency, often leading to excessive jumps without proper preparation.

The easiest way to manipulate cadence is by practicing in a more controlled environment, such as running on a treadmill. This works because you can maintain a consistent speed while learning how different step rates feel. Start by establishing your preferred step rate for a particular speed, then incrementally work up from there using 5-10% increments over time. Use a metronome app on your phone or find a song with the same bpm (Google can help you with this) as the cadence you are trying to achieve, and try to match your steps to the beat.

Once you've established what different cadences feel like, you must transition into developing actual skill and learning how to apply what you practice when it matters most. Doing it on a treadmill won't help if you crumble the second you step foot outside to run. When running on a treadmill, focus on how the new cadence feels, rather than staring at your watch. When you first start practicing outside, practice your new cadence in blocks of time, such as 5 minutes of focused cadence practice with 5 minutes of "normal" running in between. You can gradually build the time from here so that eventually it becomes your new normal.

Instead of staying fixated on a cadence, learning how to switch between different step rates and developing the skill necessary to do so in varying environments and speeds is also good practice. This variability has been found to decrease the likelihood of injury due to the improved distribution of load and the reduction of overuse in specific tissues of the lower limb.

Contrary to popular belief, there is no clear mechanical advantage to forefoot striking vs. rearfoot striking, and research has found conflicting evidence regarding injury rates between these two styles of running.

One study of 936 distance runners found that 88.9% ran with a rearfoot strike pattern (RFS), 3.4% ran with a midfoot strike (MFS), and 1.8% as forefoot strikers (FFS). There is clear support for the prevalence of rearfoot striking, which can be considered the norm among runners. The natural next question would be: which foot-striking pattern is better for speed and performance? But, let's reframe this question to "what advantages are there to switching between striking patterns?" 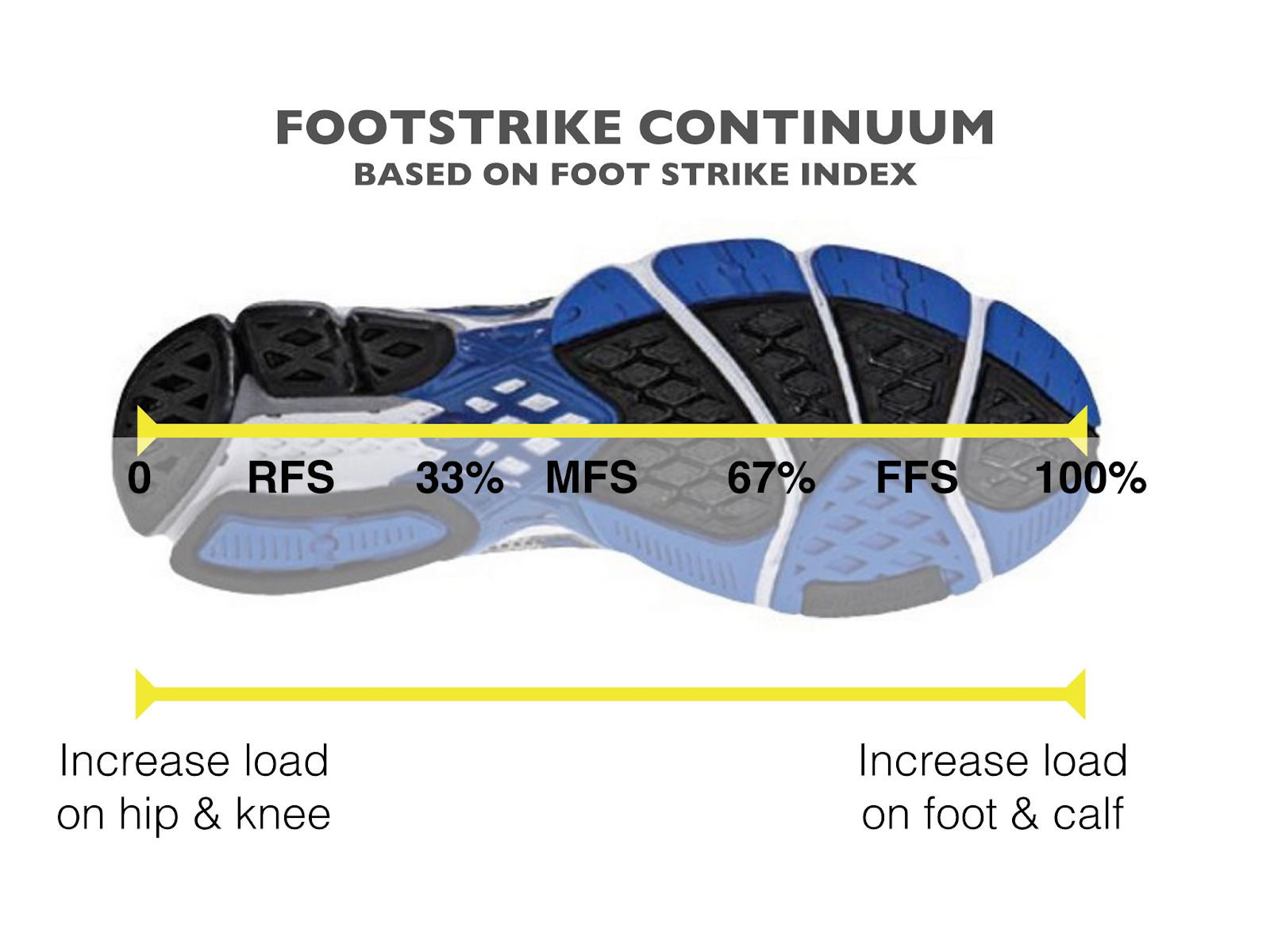 From a loading standpoint, rearfoot striking will lead to increase load throughout the hip and knee while forefoot striking increased load on the foot and calf. This has important implications for individuals with previous history of injury and are regularly increasing training volume. Although there is an association between running too much too soon and injury, it's not the volume itself that is damaging to the body; repetitive loading is the issue. If you are someone with an existing injury, you may want to change your footstrike to remove some of the stress from that injury (ie. if you have knee pain, you may want to try moving closer to a midfoot or forefoot strike to switch the load from your knees to your feet). This is best discussed with a physical therapist who can watch you run and properly assess your footstrike.

As a runner, you have to manipulate your training to leverage your strengths and build up your weaknesses to create more movement solutions to performance problems. This ability to switch it up is known as Movement Variability.

"YOU'RE DOING TOO MUCH"

When you consider the stress of running, you must consider your body and what makes it unique. That means clearly understanding where you can tolerate stress and where you can't. This will typically manifest as preferential loading patterns and how you naturally arrive at your specific running mechanics, which can be assessed by a Physical Therapist via clinical exam or gait analysis.

Having Movement Variability is about producing consistent performance outcomes using different motor solutions. In the case of foot striking patterns and cadence, having the ability to seamlessly switch between options without negatively impacting your performance is the key to running faster and longer while mitigating injury.

Running can be easy, but it can also be very hard. To make sure you're making the most of your training, don't force yourself into someone else's box of ideals or get stuck chasing perfection.

Whether you're just starting off or are a seasoned competitive runner, you'll learn lessons throughout your training, so long as you're willing to do the work and listen. To be a skillful runner is to be adaptable and capable of switching levels both in training and performing. This can only be developed if you take the time to slow cook the learning process of how your body responds to the stress of running over time.

If there is one lesson to be learned right off the bat, it's that there is no perfect model of running. Even elite runners at the highest level of competition will run differently than each other, though those differences may look minute. Instead of seeking perfection, take the time to listen to your body when you run and ask yourself questions like: What part of my body feels least happy when I run? What is sore the next day? Do I struggle more on hills or flats; speedwork or jogging slowly? Then, talk to a physical therapist to analyze what these feelings mean, and what you can do about it.

As you become more skillful, you'll be better able to accurately manipulate performance variables and fine-tune your training to become a more resilient runner.

Episode 4 of the series will explore metabolism, muscle, and fueling.